Have Mercy! A history of African-American-Targeted Advertising. By Paul Smalera 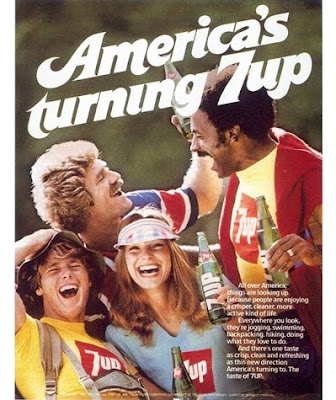 In "Thirteen Ways of Looking at a Black Man," Henry Louis Gates writes, that many black Americans think that "the soft drink Tropical Fantasy is manufactured by the Ku Klux Klan and contains a special ingredient designed to sterilize black men." He then demolishes this and other conspiracy theories while recalling America's troubled racial history, and its hope of overcoming it. When his arrest and reconciliation rekindled that history, we thought of these 1970s ads, however contemporaneously clumsy, which represented corporate America's first broad attempts at dialogue with Afro-America. 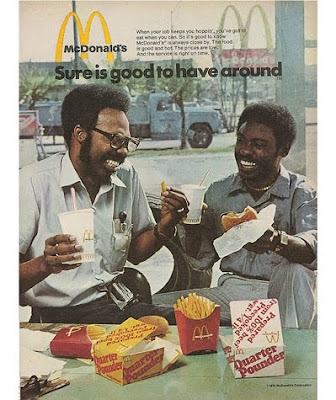 The driver in this 1975McDonald's (MCD) ad is clearly "on the job." The truck, the spare tire behind the men, the clipboard all scream it. This is "targeted" advertising: usually created by different departments or agencies together to appeal to ethnic groups. In a 1999Brandweek article, an employee at one targeted agency tells of a supervisor who told him, "Your creative must be something that is ownable by us [African-Americans]. ... Otherwise, what's to stop the client from telling their general market agency. ‘Do the same spot, but do a version with an all-black cast and black music?' 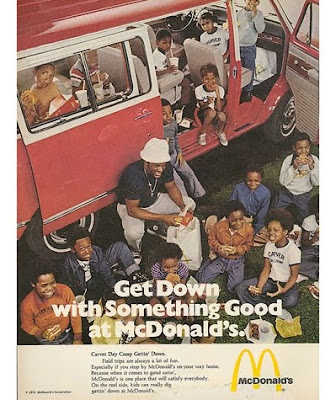 In the '70s, a change in the cultural climate led to the first real explosion of ethnically targeted advertising. Given how new the genre was, there were bound to be missteps like this one. One hopes there's another van out of frame nearby. "There's nothing more offensive than ‘trying to be down' with another culture in order to sell a product," according toBrandweek in 1999. "Consumers know when they're being had. We may think we're fooling them, but we're not." 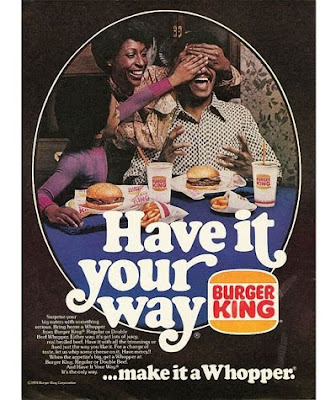 Puttin’ Hot Sauce on It 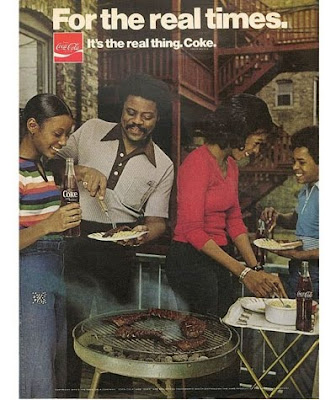 Most of the "general market"ads from Coca-Cola's "The Real Thing" campaign of the '70s feature scenes of romance, the beach, vintage automobiles, and racecars. This "targeted" ad features a family cookout-on the back porch of an apartment complex. 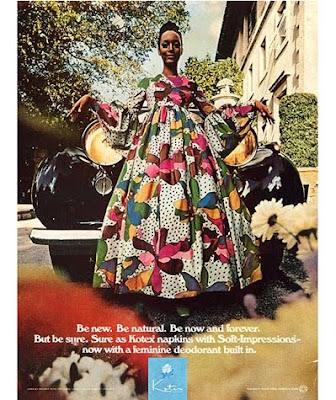 This Kotex ad is rare, in that while featuring an African-American model, there's no slang or allusion in the copy that otherwise distinguishes it as targeted advertising ... 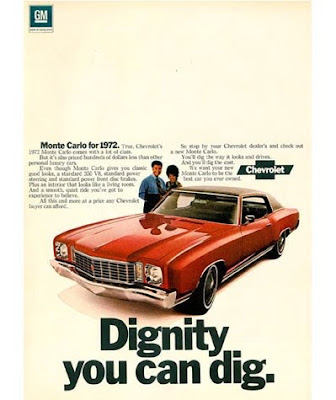 ... something that is rarely the case when it comes to this genre. It was in the climate of the early '70s, with the recent passages of the Civil Rights Acts of 1964 and 1968, that advertisers of fast food, tampons, soda, and other consumer goods first tackled targeted advertising on a large scale. But they were joining vice advertisers who had discovered the audience at least a generation prior. 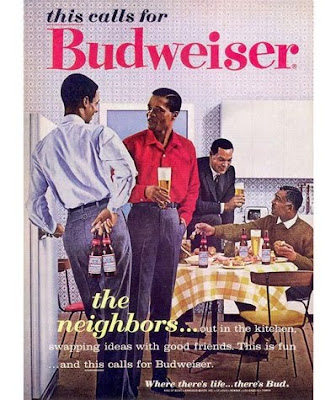 This 1962 Budweiser ad seems untargeted. Part of abroader campaign, it stands out precisely because there's nothing about this ad that doesn't resemble the others in the series other than the color of the men's skin. This approach was seldom used in the 1970s, as targeted ads came into vogue, especially in vice categories. 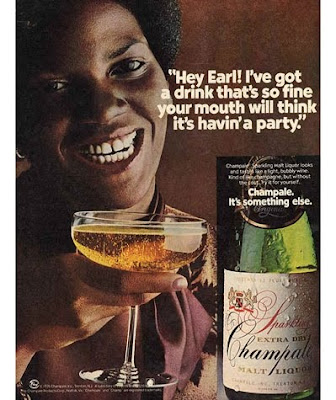 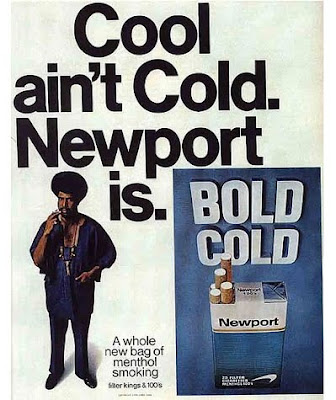 A recent study uncovered a 1973 document that showed that "Kools made a specific effort to market on buses and subways, since blacks disproportionately rely on public transit in most major cities, in hopes that Kool would 'cover the top 25 markets in terms of absolute Negroes.' " 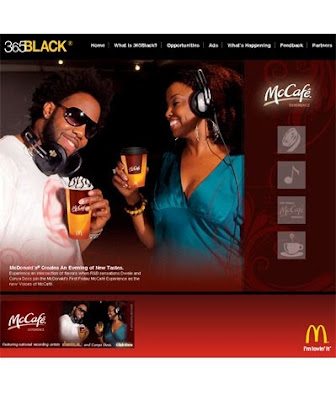 In the time of the Pepsi President, it only makes sense that the companies that have been targeting African-Americans through advertising the longest, like McDonald's, would redouble their efforts. Indeed, McDonald's McCafé coffee bar has been heavily targetedto African-American consumers. The restaurant has even set up a Web site,365black.com, which promises, "like the unique African Baobab tree, which nourishes its community with leaves and fruit," to nourish the African-American community "with valuable programs and opportunities." And mochas.

Paul Smalera has written for Condé Nast Portfolio, The New York Times and The New York Observer among others. He blogs at true/slant.

Netjacked from Slate / The Big Money

Rescued by HighJive thanks homie! https://sites.google.com/site/mayuradocs/PinIt.png
Email ThisBlogThis!Share to TwitterShare to FacebookShare to Pinterest

stealing this. Can you dig it?

also....as a kid I use to love Tropical Fantasy. But I didnt know it was made by the KKK. Strawberry Kiwi was delicious, and now I feel horrible for liking it so.

shaun and craig are batman & robinhood, stealing web post from the rich and reposting them for the wealthy!

The piece said, "many black Americans think that "the soft drink Tropical Fantasy is manufactured by the Ku Klux Klan and contains a special ingredient designed to sterilize black men."

So it wasn't really made by the Klan, just thought to have been. But it might make you sterilized though. Care to comment on that?

whether they made it or were thought to make it...it was delocious. They coulda called it KKK Drank* and I still would purchased it with my bag or sour powers and onion rings (amazingly all under $5, it was a simpler time).


*i would like to apologize in advance for the ignorance of that statement. But its a friday....asking for a pass.

Good posts. But, that 365Black.com ad is ridiculous. I think this is one of those things that we’re all going to look back on and say “I can’t believe they thought like that!”

From their website:
“Like the African Baobab Tree, which nourishes the community with it’s leaves and fruit, McDonald’s has branched out to the African-American community nourishing it with valuable programs and opportunities.”

Can someone please tell me what a Baobab tree has to do with culture and life in the United States?

And how many people of African decent have ever eaten Baobab fruit or even know what the hell a Baobab Tree is? I feel bad for the actual Africans being nourished be this tree if it’s fruit is compared to McDonald’s food. Does the Baobab Tree clog arteries and rob the body of essential vitamins and nutrients too?

Not to mention, the girl in the in their video ad is easily less than 50% recent African decent anyway. The whole concept is retarded.

Hello,nice post thanks for sharing?. I just joined and I am going to catch up by reading for a while. I hope I can join in soon.

We should be chary and particular in all the intelligence we give. We should be extraordinarily prudent in giving advice that we would not about of following ourselves. Most of all, we ought to refrain from giving advisor which we don't mind when it damages those who transport us at our word.

We should be careful and particular in all the information we give. We should be especially painstaking in giving opinion that we would not about of following ourselves. Most of all, we ought to refrain from giving advisor which we don't follow when it damages those who woo assume us at our word.

We should be painstaking and particular in all the information we give. We should be extraordinarily careful in giving information that we would not about of following ourselves. Most of all, we ought to evade giving recommendation which we don't mind when it damages those who transport us at our word.

We should be careful and particular in all the par‘nesis we give. We should be extraordinarily prudent in giving advice that we would not about of following ourselves. Most of all, we ought to escape giving advise which we don't follow when it damages those who depreciate us at our word.

I'm really Glad i found this site.Added kissmyblackads.blogspot.com to my bookmark!

OMG! At least 3 of these ads feature my mom and her brothers as kids! Thanks to this website i will have some history to show to my kids!! love it!